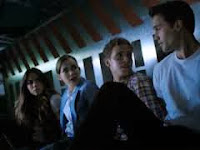 Please tell me your thoughts on this episode.
Posted by lillylilac at 2:07 PM