Please tell me your thoughts on this episode.
Posted by lillylilac at 2:46 AM No comments:

Please tell me your thoughts on this episode.
Posted by lillylilac at 2:46 AM No comments:

Queen In-hyun's Man is a time travel romance about a scholar from the Joseon era named Kim Bong-do who is trying to reinstate the deposed Queen In-hyun and how after he is given a talisman that protects him by sending him to the future whenever he is at risk of dying. In the future Bong-do ends up meeting Choi Hee-jin an upcoming actress that plays Queen in-hyun in a historical drama. Bong-do and Hee-jin end up encountering each other on several of Bong-do's accidently trips to the future and Hee-jin ends up helping him while he's in the future and the two develop a bond. 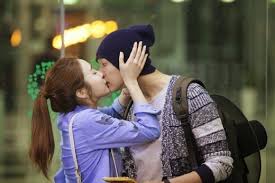 At first Bong-do and Hee-jin running into each other is something that just happens when he travels to the future and then when Bong-do figures out how the talisman works he uses it to figure out how use his time travel in order to save Queen In-hyun and other people from his time. Each time Bong-do comes to the future him and Hee-jin end up meeting each other and they become closer and Hee-jin starts doing things like kissing him pretty early on and then later proclaiming that he is her boyfriend in front of a plane full a people. By the halfway point in the series things are mostly dealt with in the Joseon era and Bong-do and Hee-jin have fallen for each other and Bong-do is planning on actually staying in the future with her this of course leads to it become a lot more difficult for Bong-do to get and stay in the future with Hee-jin and this leads to a lot of angst and heartbreak before we get to the happy ending. 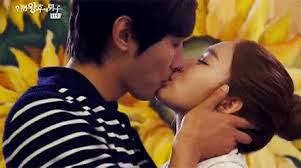 This series is one that I really loved, I love the main characters both as individuals and together and I loved the romance between the two of them, it was the best part of the series and there was so many cute sweet scenes between them and I have never swooned and squealed more than I did when I was watching this series. This series was one that was all about it's main romance and I loved it so much for that and I got myself swept up with that romance in both happy and sad times. Overall I love this series and I think that anyone who enjoys romance will also love this series so please watch this drama and if you already have please tell me your thoughts on this series.
Posted by lillylilac at 2:56 AM No comments:

Please tell me your thoughts on this episode.
Posted by lillylilac at 2:56 AM No comments:

This film is based off the manga/anime Chihayafuru and it tells the story of a high school girl named Ayase Chihaya who loves the Japanese card game Karuta more than anything in the world and her dream is to become the best in the world at Karuta. Chihaya starts a club for Karuta at her school but has trouble find members because most people aren't interested in Karuta but then she finds out one her old friends Mashima Taichi who she use to play Karuta with goes to her high school and she convinces him to join even though he hasn't played in years. Chihaya and Taichi end up finding three more members for their club and the club starts training for the upcoming Karuta tournament that Chihaya is determined to win despite their being two beginners on their team.

One of the main reason that Chihaya was always so dedicated to Karuta was because she hoped that one day it would reunite her with Wayata Arata who is the one that first introduced her to Karuta and is one of the best Karuta players around and he is the grandson of a Karuta master. Arata was friends with Chihaya and Taichi when they were in elementary school and the three competed as a team together. While Chihaya had also admired him for his skills in Karuta, Taichi had felt inferior to Arata since he was so much better at Karuta than Taichi could ever imagine himself being and that due to this he could never measure up to Arata in Chihaya's eyes. Since Taichi always feels jealous of Arata their friendship is a bit more complicated especially since they both seem to want to be with Chihaya although romance isn't something that Chihaya thinks about at all.

The movie was overall very good it did a good job at capture the feel of the series as well as the characters whom I love to a great degree already so I loved seeing them in live action as well. I loved that Chihaya still had so much energy, passion and determination and I loved that Taichi was still that slightly awkward 'jack of all trades, master of none' that I fell in love with when I was watching the anime. I would say that I felt that things were dealt with more in depth in the anime but that is something that is to be expected since there was more time in the anime. Overall I loved the movie and it renewed my love for the series that never really left me. Please tell me your thoughts on this movie or the anime series.
Posted by lillylilac at 2:55 AM No comments:

Please tell me your thoughts on this episode.
Posted by lillylilac at 2:55 AM No comments:

The Raven Boys is about a girl named Blue Sargent who lives in a family of psychics although she is not one herself and all throughout her life she has been told that the first boy she kisses will die shortly after that. Blue's life becomes entangled with a group of boys that go to a near by wealthy  private school who's students are called raven boys since they have ravens on their uniforms. The group of boys are made up by Gansey (who is the leader of the and his life quest is to find and wake the lost King Glendower), Adam(he is a scholarship student who has a bad home life and he is ashamed of both these things), Ronan(who is somewhat of delinquent and it's implied that most of his bad behavior and attitude stems from his father's death) and Noah who is a quiet boy that no one really knows all that much about.

Shortly after meeting the boys Blue starts helping them on the search for Glendower and the five of them all become good friends but it soon becomes clear that the search for Glendower is something that is much more dangerous than any of them ever dreamed it could be. Another matter that puts a bit of dark cloud over the events of the book is that Blue knows that Gansey is suppose to die sometime within in the next year and is most likely will be the first boy she kisses so that puts a bit of sadness and awkwardness in their interactions on Blue's end.

Overall I really loved the book, it had an interesting plot that I haven't seen done before, it had interesting characters who I enjoyed learning about and I also loved all the interactions between the characters I liked seeing both the already established relationships as well as the ones that were developing as I was reading the book. This is overall a great start to a series. Please tell me your thoughts in the comment section below.
Posted by lillylilac at 1:06 AM No comments:

Please tell me your thoughts on this episode.
Posted by lillylilac at 1:06 AM No comments: 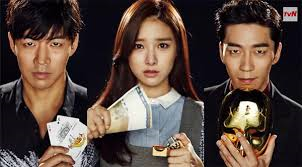 Liar Game is about a young naïve girl named Nam Da-jung who finds herself suddenly a part of a new reality show called Liar Game which is a show were the participants can win money tricking each other in different psychological mind games that require you to trick your opponents out of their money. Da-jung is far too trusting for a game like this but since her father left her with a large debt that's owed some impatient loan sharks she really can't pass up the chance to win this kind of money. 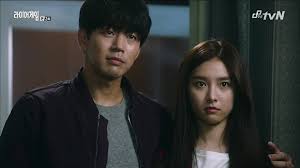 About halfway through the first round Da-jung looses all of her money by trusting the wrong person and on a recommendation of a rather nice loan shark that's in charge of collecting Da-jung's father's debt from her she seeks the help of Ha Woo-jin a former professor that is always able to tell when someone is lying and has recently been released from jail. Woo-jin eventually decides to help Da-jung because she reminds him of his mother that was recently driven to suicide by loan sharks and the two of them become an unconventional team with contrasting world views with Da-jung wanting trust people and Woo-jin firmly believing that you can't trust anyone.

Woo-jin is compelled to stay in the game because the host Kang Do-young seems to know more about the events leading up to his mother's death than anyone should know and Woo-jin has no choice but to stay in the game if he wants to learn what Do-young knows. The show is overall about the effect money can have over people especially people who are in desperate need of money, it's about how far people will go just for the chance to win money and it's about whether or not trusting anyone is truly possible.

Overall I would say that I enjoyed the show because the questions that show asks are interesting as are the challenges that the participants have to go through which makes the show fun to watch. There's a few good characters in the mix and I feel like the writing of show is pretty smart which made watching it a fun experience. Please tell me your thoughts on this series.
Posted by lillylilac at 8:54 PM No comments: