Paper Towns by John Green is about a high school senior named Quentin Jacobson who has had a crush on his next neighbor Margo Roth Spiegelman. Margo and Quentin haven't really talked to each other much in the past few years in large part due to the fact that Margo is popular and exciting and Quentin isn't. One night Margo comes over to Quentin's house and demands that he drives her around that night while she takes him on an adventure and then the next day she leaves town and no one has any idea where she went.

For most of the book Quentin along with his friends Ben and Radar and Margo's friend Lacey look into the clues that Margo left behind and they work together to figure out what they mean and where Margo might have went. There are moments during this part of the book when the characters are just hanging out together and those parts were the most enjoyable parts of the book for me, I really did enjoy most of the characters in this book I just wished that didn't have to revolve around Margo. The group eventually figure out where Margo is and they all go on a road trip to find her.

Overall I would say that I like this book but I would also say that out of the four John Green books I read this is by far my least favorite and that's because of Margo. In a lot of ways Margo actually reminds of Alaska from Looking for Alaska with the whole only my pain is valid attitude but unlike Alaska I felt that we didn't spend enough time seeing her good side and I never actually figure out why she thinks her life is so awful because it seemed pretty normal to me. So overall I would say I liked pretty much everything expect for Margo who the entire book revolves around which is a pretty big problem. Although my problems with Margo made me think of the similarities and differences between Paper Towns and the other John Green books I read which is a post I would be interested in writing someday. Please tell me your thoughts on this book.
Posted by lillylilac at 1:46 PM No comments:

Please tell me your thoughts on this episode.
Posted by lillylilac at 1:46 PM No comments:

Email ThisBlogThis!Share to TwitterShare to FacebookShare to Pinterest
Labels: Review, The 100, TV 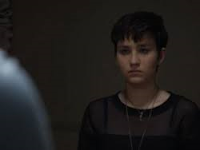 Please tell me your thoughts on this episode.
Posted by lillylilac at 1:46 PM No comments: