The Veil is the first book in the Devil's Isle series which is a series that is set in New Orleans after a recent war with supernatural beings that live on the other side of the Veil which is now close but the people of New Orleans still have to deal with the after effects of the war. One of the after effects of the war is that there is a lot supernatural beings and magic left over in the world which is a problem for humans who are sensitives. Sensitives are humans that can wield magic if they absorb enough of it but if they absorb too much of it they become wraiths which are mindless beings that live only to kill. The government agency known as containment treats supernaturals, sensitives and wraiths as one and the same and lock them all up in a place called Devil's Isle which is basically a supernatural prison.

Claire Connelly is our main character she is a sensitive who is living in hiding and she doesn't know how to control her abilities so she tries her best not to use them since she doesn't want to turn into a wraith one day. Claire is sure that she is going to be caught by containment after she used magic to fight off a wraith in front of a camera, Claire tries to make a run for it but she is stopped by a bounty hunter named Liam. Liam convinces Claire to stay to cover her tracks and learn how to control her magic since he knows that control is what will prevent her from becoming a wraith. Claire soon learns that not all supernaturals are bad and that being a sensitive doesn't have to mean that she will have to become a wraith one day. In the later parts of the book as Claire learns to control her abilities and develop feelings for Liam she also learns of some government conspiracies about opening up the veil again.

Overall this book was good it had an interesting plot and mythology to it, the characters could have been better but were in no way unlikable. This book was a good start to a series and I look forward to reading the next one in the series one day. Please tell me your thoughts on this book in the comment section down below.
Posted by lillylilac at 1:58 PM 1 comment: 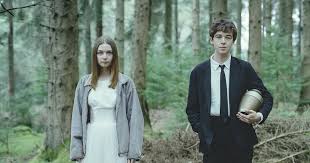 =
The Second season of The End of F***ing World takes place two years after the first season with Alyssa and James still dealing with the consequences of the events from season one. Alyssa
only ended up getting community service but she is still also dealing or rather not dealing with the trauma of Clive attacking her before he was killed which has left Alyssa to feeling numb. In an attempt to make herself feel something different Alyssa decides to get married to this guy named Todd that she doesn't even know that well. James was shot at the end of last season and that injury nearly killed him, James had to actually relearn how to walk again during the time between the two seasons. James is still very much in love with Alyssa but he broke up with her because her mom convinced him that he would just make her life worse so he has stayed away from her since breaking up with her in a letter. After James died after the two of them reconnecting it has left him without a purpose until he was sent a bullet with his name on it has a threat and then he decides to find Alyssa to make sure she is okay assuming she also got a bullet which she did but she wasn't too alarmed by it.

The bullets were sent by Bonnie a young woman from an emotional abusive household who believed that she and Clive where in love and that James and Alyssa killed him without reason and therefore Bonnie is setting out to kill the both of them. Bonnie ends up lucking out on getting be alone with the two of them after Alyssa had ran out on her wedding and ran into James which is led them to go on another directionless road trip and they pick up Bonnie who's pretending to be a hitchhiker.

This season is one that is mostly dealing with the aftermath of season one and it does excellent job at doing this and explore both characters and how they've changed since we last saw them, the show also does a good job at getting us to understand where Bonnie is coming from even though we know how wrong her way of thinking is. I liked that we got to see Alyssa and James reconnect with each other and I liked that we could see all the ways they were the same and the ways in which their relationship is different know that they are different people then they were when we first met them. The acting, directing, writing and music choices were great all around as well. Overall this was a great second season and a good ending to the show. Please tell me your thoughts on this show in the comment section below.
Posted by lillylilac at 1:57 PM No comments: