Book Review: The Boy and Girl Who Broke the World

The Boy and Girl Who Broke the World Review

The Boy and Girl Who Broke the world is about a boy named Billy Sloat who is endlessly optimistic despite having a pretty awful life and Lydia Lemon who is more realistic and cynical about her own awful life. The story is set in a Washington in a world that is similar but worse than our own world and more absurd and may have a fantastical element to it. Billy has been raised by his grandmother his entire life since he's never knew who is father was and his mother was a drug addict who died when he was very young, Billy has never had any friends despite being very friendly he was never had any friends. Lydia is a mixed-race girl who is raised by her single father and she has given up up her dream of being a dancer.  Billy ends up befriending Lydia on the first day of school which is something that Lydia is skeptical about but doesn't think it's worth the effort to fight him on his assumption so the two end up having lunch together and sometimes hang out together.

After sometime the friendship between Billy and Lydia become more mutual which is when Lydia starts to worry that Billy doesn't seem to be able to see things as they are and that he may not be able to keep up his positive outlook up forever when he's constantly being rejected. Billy in turn thinks that Lydia should be more open to giving people a chance before she decides the worse about them and that overall she should look for the good in things.

About midway through the story Billy's famous singer uncle Caleb comes into town and Billy makes it his mission to take care of him hiding him from both the press and his grandmother. Lydia dislikes Caleb because he's kind of a dick so she refuses to came over to Billy's house until he's gone which ends up causing some distance between the two of them. Lydia ends up starting a dance class after Billy tells her about a scholarship for a class and Lydia ends up making up making another friend in the class which leads to her and Billy spending even less time together.

Overall I really liked this book, I think that the main characters and there relationship with each other was really good and I enjoyed watching their story unfold. I thought that the world building was interesting yet confusing. Please tell me your thoughts on this book in the comment section below.
Posted by lillylilac at 4:07 PM No comments:

Email ThisBlogThis!Share to TwitterShare to FacebookShare to Pinterest
Labels: Books, Review, The Boy and Girl Who Broke the World

Romance is a Bonus Book Review 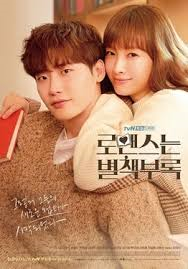 Romance is a Bonus Book is about Kang Dan-I who is  thirty seven years old and recently divorced with a daughter, Dan-I is having trouble finding a job since she took several years off of work to raise her daughter. Dan-I is stuck in a very bad position when it comes to finding a job since because of her gap in employment she's not qualified for upper level jobs but on the other hand entry level jobs won't hire her because she is overqualified for those jobs. Dan-I's living situation becomes so bad that her house ends up getting not just foreclosed on but actually ends up getting torn down so this means she's left with pretty much nothing with nowhere to live and this leads her to secretly living in her friend Cha Eun Ho. Eun Ho is five years younger than Dan-I and he is writer and a chief editor at a publishing firm, he has known Dan-I since he was fairly young after she saved his life and he visited her frequently in the hospital after that. Eun Ho has had a crush on Dan-I for years but she only sees him as a friend or a younger brother.

The publishing company that Eun Ho works at ends up looking to hire people to work for them from any background regardless of experience or age which leads to Dan-I ending up applying for that job but deletes her previous job history in marketing and her college education because she's learned from all of her rejections that a job would feel more comfortable hiring her if they believe that she is beneath them. Dan-I ends up getting the job which is great for her and she ends up being the best new hire they end up getting both because of her experience and how hard working she is. Dan-I applying for the job obviously tips Eun Ho off that something is going on with Dan-I since he knows that she was lying on her resume which leads to her telling him about everything bad that has been happening for the past year, Dan-I and Eun Ho end up both living and working together.