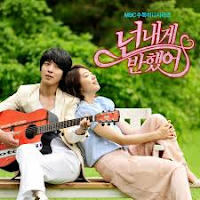 Heartstrings is about a girl named Lee Gyu-won a traditional music who goes to a performing arts college and she ends up challenging Lee Shin a popular male student who is lead singer and guitarist of a band that is very popular at their school especially among the female students. Gyu-won thinks that Shin is a jerk because he's overly harsh when he rejects girls and can come across as quite arrogant when it comes to his music but after the two of them actually have to spend time together they both do end up developing feelings for each other as they get a better understanding of each other as people.

Another one of the main plots of the series revolve around the 100th anniversary performance that the school is having and pretty much all the important characters are working on the show in one way or another. Gyu-won ends up in the running to play the female lead despite having no experience in acting or dancing and very little experience in actual singing which is something that upsets a lot of her fellow students but since the director of the 100th anniversary performance is oddly fixated on Gyu-won she's in the running for the role despite lacking the skills and experience that such a role would require.

One of the students that wants to be the female lead the most is Han Hee-joo who is an extremely hardworking student who has been working on dancing, acting and singing through out her time at the school and is the daughter of the head of school who most people don't like since she's often mean to her classmates because she doesn't want to appear weak in front of them. Another subplot in this series is about how a nerdy drummer named Yeo Joon-hee ends up falling in love with Hee-joo basically at first sight and she ends up falling for him as well because of how he's kind to her and always there for her even after she tells him to go away. 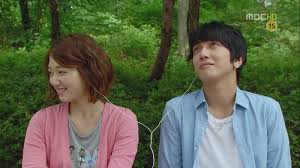 Overall I liked this series a lot I liked the lead characters and most of the supporting characters expect for the director and Gyu-won's grandpa, and I was happily surprised by how well Gyu-won and Shin worked as a couple once they got together and I found them to be very sweet together. I thought that the music in this series was good but since there was a limited amount of songs I felt like the music could become a bit repetitive at times but still enjoyable. Please tell me your thoughts on this series.
Posted by lillylilac at 11:40 PM 2 comments:

TV Review: Shadowhunters: A Door Into the Dark(2.02)

Shadowhunters: A Door Into the Dark(2.02)Review

Please tell me your thoughts on this episode.
Posted by lillylilac at 11:40 PM No comments:

TV Review: Because This is My First Life

Because This is My First Life Review

Because This is My First Life is about Yoon Ji ho a thirty year old who is still working as an assistant drama writer who finds herself forced out of the apartment that she shares with her brother that has paid the down payment for when she discovers that he has gotten married to girl who he got pregnant during the time Ji ho was off working on the last drama she was helping to write. Around the same time Nam See hee a man who likes his life to be as uneventfully as possible and seems to care about maintaining a sense of order and his cat above all else, has had to kick out his most recent tenant because said tenant not only didn't take care of the recycling and feeding his cat when he worked late like was agreed upon when the tenant moved in but he also caused some property damaged after coming home drunk. It ends up that Ji hoo needs to find a new place to live but discovers that pretty much anywhere that she can afford to live is not really somewhere one should live so she ends up moving in Se hee's apartment without her knowing that she moved in with a guy and Se hee is also unaware that his new roommate is a girl but despite going about a week living together without meeting each other he thinks Ji hoo is the best tenant he has ever had and she quite fond of him as well as landlord both because of the affordable price for the room and because of how nice the apartment is. 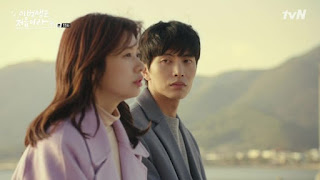 After Ji hoo and Se hee realize that they are living with each other they at first find it awkward but after awhile they decide that since it's unlikely they would have romantic feelings for each other it's okay that they live together and that goes well for awhile until Se hee's mother discovers that her son's roommate is a woman and while ee hee is fine with just ignoring his mother's feelings on the subject Ji hoo isn't so she moves out. Later on something happens in the place that Ji hoo is staying that makes her feel unsafe there and so she ends up back at Se hee's apartment again and shortly after that the two decide to set up a contract marriage and well as time goes on the line between being fake married and just being married starts to blur.

The subplots in the series have to do with how one of Ji hoo's closest friend Yang Ho rang wants nothing more than to get married to Sim Won seok ,her boyfriend of seven years while he wasn't even thinking about marriage even though he does love her and wants to be with her forever. The two of them have very different expectations for their relationship and they spend the series figuring out whether or not their love for each other means more to them than having the futures that they picture themselves having even if they aren't with each other. The other main subplot is about the unusual relationship between independent business woman Woo Su ji  and dorky Ma Sang goo who at first seem to be mostly about they hooked up one time in the past and Su ji doesn't remember it while Sang goo does and therefore he wants to hook up with her again to leave a more lasting impression but after Su ji tells Sang goo that she has never dated anyone despite having hooked up with many men he starts to look at her differently and this leads to him wanting be therefore as someone who supports and cares for her in a way that no one has before. I ended up likely the relationship between Su ji and Sang goo much more than I thought I would mainly because of the shift that happened in the relationship early on that changed what the relationship was about and turned it into something unexpectedly sweet. 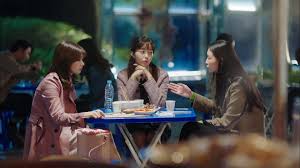 Overall I really love this series it had a cast of great characters that I couldn't help but invest myself in and I really loved all the relationships in this series and not just the romantic ones(although those were great) but also the platonic ones, my favorite of those was the friendship between Ji hoo, Ho rang and Su ji. This series had a lot of good things to say both about relationships and finding your place in the world and at the same time it was a lot of fun to watch as well. Please tell me your thoughts on this series in the comment section below.
Posted by lillylilac at 7:29 PM 2 comments:

Email ThisBlogThis!Share to TwitterShare to FacebookShare to Pinterest
Labels: Because This is My First Life, kdrama, Review, TV

Book Review: I Believe in a Thing Called Love

I Believe in a Thing Called Love Review

I Believe in a Thing Called Love is about an overachieving high school senior named Desi Lee who seems to have everything in her life all planed out and going smoothly expect for her love life. Desi has never had a boyfriend because she gets nervous and makes a fool out of herself in front of any boy she likes. After developing a big crush on a new student named Lucas and finally watching some Korean dramas with her dad Desi comes up with the idea of using Kdrama tropes as a way to win Lucas over because she realizes that quite a few Kdramas start off with the heroine embarrassing herself in front of her love interest and still getting her happy ending, so Desi things that she can study the common tropes that appear in Kdramas and making a list of them and finding a way to make them happen so that she can get her happy ending with Lucas.

The character of Desi was one that I really enjoyed because of how she was both very headstrong and smart yet also insecure and nervous about the things in which she can't control in her life. Desi was a character that was likable yet frustrating with how it was obvious to the readers that Lucas like Desi without her having to force them into situations that are similar to ones that occur in dramas yet she didn't give up on her plan because she couldn't just trust that being herself was enough to get Lucas to like her. I liked that we saw quite a bit of the friendships that Desi had as well and I especially liked that we got see quite a bit of time spent on showing the relationship between Desi and her dad as well.

Overall I liked this book quite a bit it had an interesting main character and I really liked the premise since I'm a fan of Kdramas although I'm not sure I exactly agree with the list of tropes that Desi came up with based off of them. I thought that there were a few times that the editor really let the writer down in this book because there were a couple of times were I noticed that a word was missing were one needed to be or added were it shouldn't have been. Please tell me your thoughts on this book in the comment section below.
Posted by lillylilac at 7:28 PM No comments: