1. Fruits Basket: This series is my favorite series of anything that has ever been written and I honestly believe that no other series will ever be as perfectly written as this one was. Fruits Basket is a series that just has so many great characters and relationships and pretty much the entire series is about how those characters and relationships develop over the course of the series. I love that this series is one that starts out light but then gets darker later on but the story ends on happy and hopeful note for the characters. This series is great if you haven't read it you should because it's a wonderful story that will teach you to be a better person.
2. Tsubasa Reservoir Chronicle: This series is one that has the main characters traveling through dimensions which is a concept one does not see often which makes the series stand out from the beginning. This series is one that has great characters that I can't help but to love and really great romance that almost broke the space time continuum so that right there shows you how powerful their love for one another is. The series also has great art since it was created by Clamp.
3. Cardcaptor Sakura: This is another great series by Clamp and this one is about a ten year old girl who has to capture these Clow cards in order to keep her town safe. This series is really sweet and fluffy and at it's core Cardcaptor Sakura is a story about love in all its forms and it's just a series that always makes me happy.
4. Tokyo Babylon: This series is also by Clamp but unlike Cardcaptor Sakura this story is not a happy Story in fact it's a tragic story. This series has young man that has magic powers and uses them to help people who he believes are generally good and kind at heart and through his job he sees what people do at their most cruel and selfish points which starts to chip away at his optimistic outlook on life but nothing hurts him quite as much as falling in love, it doesn't end well.
5. Gakuen Alice: This series is a story about a young girl who runs away and joins her friend at boarding school for gift children and while the story starts off fairly lighthearted things getting darker as the series goes on and more about the school is revealed.
6. Chibi Vampire: This series is a coming of age story for a young girl who is a vampire who is a reverse of what a vampire should be in that she produces too much blood rather than needing to drink blood. The series is delightful and quite a fun read with likable characters and interesting mythology.
7. Shugo Chara: This series is a magical girl series which is my favorite sub-genre of manga/anime and this series deals with a girl who puts on a false cool girl image but is forced to confront her other would be selves by her guardian characters who help her save other kids around age from loosing their dreams, the premise of the series doesn't make a whole lot of sense out of context but  I assure you this series is great.
8. Rosario + Vampire: This series is about an extremely average boy that accidently gets sent to a school for monsters and ends up unwittingly winning the hearts of quite a few of his female classmates by simply being nice to them. This series can be a bit out there but it's great fun to read.
9. Pandora Hearts: This series is a very different take on Alice in Wonderland that deals with a young boy being taken to a sort of underworld only to be saved from that world by making a deal with Alice who is someone who lives in that underworld. This series is a bit hard to sum up but the story and it's characters are really great.
10. Magic Knight Rayearth: This series is a magical girl series about three girls who get transported to another world to save it's ruler and become great friends with each other through out the series. This series has great art, good characters, an interesting plot and killer twist at the end of it's first series.
Posted by lillylilac at 9:57 PM 8 comments:

Please tell me your thoughts on this episode.
Posted by lillylilac at 9:56 PM 3 comments:

Scream: Village of the Damned(2.08)Review

Please tell me your thoughts on his episode.
Posted by lillylilac at 9:56 PM No comments: 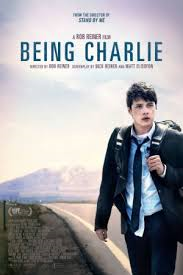 Being Charlie is about a boy named Charlie(Nick Robinson) who is the son of politician who is running for governor and he is also a drug addict. Charlie has been going in and out of rehabs for quite some time when the film started. When Charlie returns home after ditching his last rehab his parents demand that he goes back to a different rehab program at first Charlie protest saying that this programs just don't work for him but he soon learns that he really has no choice in the matter so he goes to the rehab with no really intention of getting clean and sober for good.

When Charlie gets to the new rehab place he is no more committed to this program than he is to any other but after he meet Eva(Morgan Saylor) a girl around his age that he bonds with and starts to develop feelings for he finds the program not be quite so bad. Charlie ends up doing a fairly good job at advancing in his program now that he motivated by his relationship with Eva but Eva he is having a harder time at motivating herself to stay clean and her relationship with Charlie isn't really enough for her and since Charlie cares enough about her to follow her anywhere this is something that ends causing problems for both of them.

Overall I really loved this film I found the story to be interesting and I liked that while it dealt with a dark subject matter that the film itself didn't feel overly dark at anytime. I really liked the way that this film explored the character of Charlie and I thought that the acting in the film was well done as well. Please tell me your thoughts on this film.
Posted by lillylilac at 9:56 PM No comments:

Email ThisBlogThis!Share to TwitterShare to FacebookShare to Pinterest
Labels: Being Charlie, Movies, Review

1. Dare Me: This book is one that I never really hear about on book blogs unless I'm looking for it although pretty much everyone who has read it has loved like I have. This book dealing with dark side of high school cheerleading is one that has a very different look at high school than I usually read about it as well as having intriguing characters with complex relationships with each other and the writing in this book is just incredible the descriptions just shows so much character and sets the mood of the book.
2. Traffick: This book is the squeal to Ellen Hopkins book Tricks and I think that this book is even better than the first one. I really loved that this book was about recovery rather than destruction which is what the last one was about and I liked that the characters had live with the consequences of their actions from the last book and I liked that the characters were shown to still be struggle in this book as well.
3. Triangles: This is another book by Ellen Hopkins but this one is an adult novel that dealt with lives of three women who all had very different things to deal with in life. I didn't like this book as much as the other ones on this list but  it was still a good book and deserves more recognition than it gets.
4. Also Known As: This book was just a really fun and sweet story of a safe cracker having her first solo spy mission and going to high school for the first time. This book had fun characters, plot and writing style that made this a joy to read and I wished more people would talk about this book because a great fluffy romance YA book.
5. Lola and the Boy Next Door: While this book is pretty popular I'm putting it on the list because I feeling it also overshadowed by Anna and the French Kiss and I think that people in general only pay attention to this book because it's the second one in the Anna and the French Kiss series. I think that this book is actually much better than Anna and the French Kiss, I think that the characters are both more likable and interesting and that the plot just feels a lot more down to earth and I think that the book deserves to be recognized for how good it's story is rather than how popular the book that came before it is.
Posted by lillylilac at 10:56 PM 1 comment:

Splintered is about a girl named Alyssa Gardener who is an ancestor of Alice Liddell the girl who Alice in Wonderland is based off and the females in Alyssa's family have been cursed to hear the voices of flowers and insects ever since. Alyssa fears that she will one day she will loose her last thread of sanity and  be committed to a mental health hospital like her mother or jump out a window and kill herself like her grandmother did. Early on in the story Alyssa starts to understand that neither her mother or herself are really crazy but rather that Wonderland is real and that she has to go there to break her family's curse before the doctors treatments make her mother truly lost to her. While in Wonderland Alyssa learns about who and what she truly is as she face many trials to prove her worth to Wonderland.

In this book there are two love interest for Alyssa including her friend and neighbor  Jeb who is an artist like Alyssa is and as a less than perfect family like she does but he also has a girlfriend but the two grow closer when Alyssa accidently drags Jeb with her to Wonderland. Alyssa's second love interest is the manipulative netherling Morpheus that lured Alyssa to Wonderland to help him break his own curse but still claims to care for her even after he continues to put her in danger. Unfortunately for me I disliked both of Alyssa's love interest so I found these parts of the book to be pretty boring.

Overall I thought the book was okay, it had an interesting concept and I liked how it dealt with the Alice and Wonderland story as well as how it related to mental illness and I thought that the character of Alyssa was good and I liked that she motivated by trying to save herself and her mother's sanities. On the other hand I disliked Morpheus and found Jeb boring so the romance angle in this book didn't work for me at all. Please tell me your thoughts about this book in comment section below.
Posted by lillylilac at 10:56 PM No comments:

Please tell me your thoughts on this episode.
Posted by lillylilac at 1:15 AM 1 comment:

Please tell me your thoughts on this episode.
Posted by lillylilac at 1:15 AM No comments: