Timeless: The War to End All Wars(2.01)Review

Please tell me your thoughts on this episode.
Posted by lillylilac at 10:17 PM No comments:

Book Review: Isla and the Happily Ever After

Isla and the Happily Ever After Review

Isla and the Happily Ever After is about a high school senior at a French American school in Paris named Isla who is shy and doesn't know what she wants to do with her life. Isla has had a crush on the artistic slacker Josh since she was a freshmen and when he starts paying attention to her she realizes that her feelings may not be so one sided. Isla and Josh get together fairly early on in the book and then Isla has to learn to balance her time between Josh, friends and school work but she tends to spend most of her time on Josh.

Isla and Josh's relationship starts to fall apart after Josh gets expelled from school early on in the school year which means that Isla and Josh are now in a long distance relationship and that he isn't allowed to talk to her for awhile. The distance and lack communication causes their relationship to become strained and it being strained leads Isla to believe that Josh doesn't really love her because she no longer believes that she is worth a guy loving because she doesn't know who she is.

The character of Isla feels like she becomes a different person in the second half of the book since in the beginning Isla just seemed like someone who was shy and a bit inexperienced but also someone that didn't doubt that she was worthy of being in a relationship despite not having her future planned out. In the second half of novel Isla become a character that thought that her relationship ending was a given so she decided to break her own heart rather than let Josh break it first, this mindset seemed too cynical and self sabotaging to fit with her characterization from the first half of the book.

Overall I thought that book was okay, it had a sweet couple that it's plot was centered around which made it easy to root for their happy ending even if I did think Isla's character changed rather abruptly halfway through the book. Another thing in the book that I didn't like was Anna and St. Clair suddenly getting engaged towards the end of the book because well I never liked those two together and it felt out of place and too soon for the characters to get engaged. Please tell your thoughts on this book in the comment section below.
Posted by lillylilac at 10:17 PM No comments:

Email ThisBlogThis!Share to TwitterShare to FacebookShare to Pinterest
Labels: Books, Isla and the Happily Ever After, Review

Please tell me your thoughts on this episode.
Posted by lillylilac at 10:17 PM No comments:

Email ThisBlogThis!Share to TwitterShare to FacebookShare to Pinterest
Labels: Review, The Gifted, TV

TV Review: I'm Not a Robot

I'm Not a Robot Review 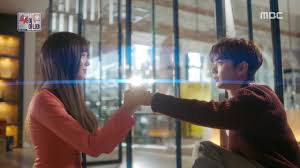 I'm not a Robot is about a man named Kim Min kyu who developed an allergy to humans shortly after his parents died and at the beginning of the series he gets a message from some scientist who tell him they have developed a robot that looks and should be able to act just like a real human. Min kyu decides to meet the scientist to check out their robot and after he sees how human-like the robot is and assures that it's really a robot he agrees to keep funding the scientists research if he the robot is able to brought over to his house for him to test out how well it works. Right before the scientists are suppose to bring their robot over to Min kyu's house one of the scientists end up damaging the report which leads to Hong Baek kyun, scientist that created the robot to go look for the woman he based the robot on, Jo Ji ah, his ex girlfriend. Ji ah is an inventor who seems to only manage to invent things that most people find useless which has led to her being in a lot of debt because she's always working on her inventions or starting up a new business to fund her inventions, since Ji ah really needs the money she ends up agreeing to pretend to be a robot when Min kyu does the test for it.

Ji ah is only really able to pull off pretending to be a robot because the scientists tell Min kyu that there is a function called friend mode after she first reacts in a way a robot wouldn't and they are all very surprised when he buys that excuse. Since Min kyu hasn't really had the chance to interact with people for the last fifteen years he ends up finding anytime Ji ah screws up acting like a robot to be delightful rather than suspicious and this ends up leading to him wanting to train the robot himself and since the robot is still going to take awhile to repair that means that Ji ah is going to have to continue to pretend to be a robot. As time goes on Min kyu and Ji ah end up actually developing a real friendship and Min kyu discovers that his allergy started to be cured when he was with Ji ah which only makes his affection for her grow even more. 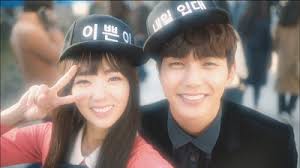 Soon enough it becomes clear to both Ji ah and Min kyu that they have romantic feelings for each other and since it seems pretty clear at first that the feelings are mutual they are both very happy about this until they remember their situations. Min kyu realizes that he can't be in love with a robot because a robot can't ever really love you back because their just doing what their programs tell them to and Ji ah realizes that Min kyu thinks that she's a robot and that there really isn't a good way to tell him that she's been deceiving him for as long as she has been. It ends up taking quite a long time for Min kyu to figure out that Ji ah is not a robot and for them to actually get together.

Overall I really loved this series, I really loved both our main characters and I loved watching them interact with each other and I found them be extremely cute together. I was surprised by how emotionally invested this show ended up getting me because I actually found myself crying more than once and I also really liked that the show made me understand why Ji ah couldn't just tell Min kyu that she's not a robot which made the middle angsty section of the show much more compelling to watch. I also thought that this show looked really beautiful there were so many scenes in this show that just looked and felt so dreamy and romantic and the music also helped add to this atmosphere. Please tell me your thoughts on this series.
Posted by lillylilac at 7:35 PM No comments:

Email ThisBlogThis!Share to TwitterShare to FacebookShare to Pinterest
Labels: I'm Nor a Robot, kdrama, Review, TV

Top 7 Books That Surprised Me

1. Reading in the Dark: This book isn't the type of book that I usually read but I ended up finding myself very invested in the main character and how he deals with discovering more and more secrets about his family and how learning the truth put a strain on his relationship with his family.
2. Catch 22: Since all I knew about this book before I read it was that it's a war book I assumed that I wouldn't like it but once I started reading it I found that I actually really enjoyed this book because of it's absurdist sense of humor.
3. Slaughter House Five: This is another war book that I thought I would hate but actually ended up enjoying although not for exactly the same reason, this one I more enjoyed that it had a science fiction element and a non-linear timeline.
4. Anna and the French Kiss: I really expected that I would love this book because everyone seemed to love this book and couldn't stop talking about how dreamy St.Clair was so I figured that I would feel the same way, I didn't. While I do think that the book was well written and it certainly isn't the worst book I ever read, I found that I couldn't get invested in the romance because I ended up hating St. Clair for flirting with Anna for months while having a girlfriend and I found that I didn't like Anna much better. I also found it really annoying that Anna was suppose to be a film geek but thought that Paris didn't have movie theaters because anyone who knows anything about films knows that the Cannes film festival takes place in France so anyone with common sense would assume that Paris would at the very least have a movie theater.
5. Lola and the Boy Next Door: Since I wasn't a big fan of Anna and the French Kiss I didn't think that I would like this one much better but to my surprise I found that I really loved this book. I found that Lola was a flawed but likable heroine and that Cricket was a very sweet and swoonworthy love interest and that I really loved the two of them together.
6. Splintered: I thought that I would like this book a lot more than I actually did because I thought the premise for this book sounded great but unfortunately I ended up not really liking any of the main characters so it made it hard to become invested in the story.
7. Miss Mayhem: I really loved Rebel Belle so I assumed that I would love this book just as much but I sadly found that I didn't love it as much although I still did like it this book didn't leave me eager to read the next book because I was worried that book would end up disappointing me as well.
Posted by lillylilac at 7:35 PM No comments: