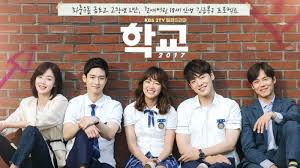 School 2017 like the other entries in the School franchise spends the series dealing with issues of a variety of students who are in the same class. Our main character in this series is Ra Eun ho a student who doesn't study well and has a tendency to get into trouble but is very good at drawing and is determined to achieve her dreams. At the school there is a mysterious figure called X who causes trouble for the school by playing pranks and revealing all the injustices that take place at school and one Eun ho stumbles upon X in the teacher's office and she ends up being accused of being X. Eun ho is tasked with the job of finding out who X is afterwards in order to clear her name but she ends up helping with X's plans instead since she believes he stands for justice. 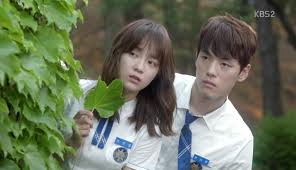 Eun ho ends up developing a friendship with Hyun Tae woon who is the son of the Chairman of the school which allows him to get a way with things that other students wouldn't, he doesn't have good grades either and has a bit of rebellious attitude. At first Eun ho doesn't like Tae woon much but after she gets to know him better she learns that he isn't the person she assumed he was at first and the two of them end up becoming very close and partners in a way. After awhile Tae woon realizes that he has a crush on Eun ho so he confesses to her and while she takes awhile to realize her feelings she does accept his confession in the end. 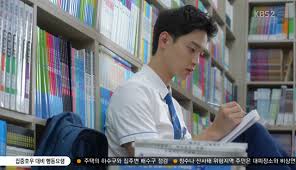 Another character that receives a lot of focus in this series is Song Dae hwi who is the first ranked student in the class who comes from a poor background. Dae hwi feels like he has to spend a lot of time helping out Kim Hee chan a rich student that is ranked second in the class because he needs money in order to afford extra classes and counseling that are vital for getting into the top rated school that he needs to get into to succeed. Dae hwi spends a good part of the series feeling like he has to do things that he doesn't want to do for Hee chan because he believes that he needs him to succeed even though doing those things eat away at him. In the last part of the series Dae hwi is able to finally pull himself a way from Hee chan and to reconnect with an old friend and make new genuine friends which helps him to become a much happier person.

There is also a plot thread about how Tae woon and Dae hwi used to be very close friends but aren't anymore because of what happened surrounding the death of their best friend and how they didn't understand or approve of the other's actions around that time. This plot was clearly made to try and recapture the magic of Nam soon and Heung soo's relationship from School 2013 and while I really do enjoy the plot in this drama as well it still doesn't hold a candle to that relationship because there wasn't enough time devoted to Tae woon and Dae hwi's relationship and they just don't have the same amount of chemistry that Nam soon and Heung soo did. Even though it didn't compare to what came before it, I still did love the relationship and was happy to see the two reconcile and become friends again. Another plot thread dealt with a quiet student named Seo Bo ra who feels like the deck is stacked against her so high that there isn't any point in fighting for herself when other students try to make them take the fall for her. Eun ho ends up reaching out to Bo ra and this helps her to find her voice again and to believe that she can fight for herself again now that she has a friend by her side.

Overall I really loved this series for all the different characters, stories and relationships that it had in it even the ones that I didn't mention in this review. There are so many things to love about this series that I think watching it is well worth your time. Please tell me your thoughts in the comment section below and what series in the School franchise is your favorite.
Posted by lillylilac at 4:18 PM No comments:

Book Review: Turtles All the Way Down

Turtles All the Way Down Review

Turtles All the Way Down is about a high school student named Aza who suffers from some form of an anxiety disorder which keeps her stuck in her head most of the time worrying about all the different ways that she could catch C.diff which it's somewhat implied that this is what her father died of suddenly when she was younger. One day Aza ends up being convinced by her best friend Daisy that she should try to reconnect with her childhood friend Davis who's rich father had disappeared recently and the police are offering a hundred thousand dollar reward to anyone who has information on how to find him. Davis is happy to see Aza again even though he knows that she most likely is only talking to him again because of what happened to his father and Aza finds that she actually does like spending time with Davis even though she can't understand why he would like to spend time with someone who is as stuck in her own head as she is.

Aza ends up dating Davis for awhile and while it seems to work okay as long as they're just talking to each other she finds it hurt to enjoy holding his hand or kissing him even though part of her desires to do those things with him because all she can think about is how many germs are being spread through that action. In the second half of the novel Aza also ends up getting into a fight with her friend Daisy about how they can't really understand how the other sees the world but they end up making up and being a little more aware of how each other thinks about things. Things between Aza and Davis don't seem to work out because Aza can't really date someone in the normal way and she doesn't want Davis to date her and hope that someday she will get better.

Overall a I really enjoyed this book the characters really stood out and I was invested in them and the relationships that they formed with each other. I thought that the writing was good and really let us get to know what it's like to be stuck in Aza's head with her. Please tell me your thoughts on this book in the comment section below.
Posted by lillylilac at 2:25 PM No comments: