The Dream Thieves is the second book in The Raven Cycle series and in this book deals more in-depth about things that were there in the first book but not really the focus of the book. In this book a big focus is put on Ronan and his ability to take things from his dreams and have them be real in the real world. This ability that Ronan has is one that is very interesting from the start but become even more so when you learn more about it throughout the book and I liked that we also learned a lot more about Ronan as a character in this book as well.

One of the other main focuses in this book is how Adam is different  now since he made a sacrifice at the end of the first book even though it isn't clear what the sacrifice did to him it's clear that it did change him and not for the better. Adam has to deal with this change and accept the role that he promised to fulfill in the last book but by the time he has realized this his friends have already noticed a change in him and this has allowed his relationships with them to change slightly. In this book Blue and Gansey take a bit of a back seat in terms of plot but one thing that does develop with them is that it's clear that they started to develop romantic feels for each other even though neither plans to act on them.

In this a book a new character named Mr. Grey is introduced as a hit man that was hired to find an object that takes things from dreams with neither himself or his employer knowing that it's not an object but a person that can pull things out of dreams. Mr. Grey is a character that is dangerous and not quite trustworthy but he also isn't evil either so that makes him interesting to read about because your not quite sure what to make of him.

Heartless City is a show that is about criminals, undercover cops and non-undercover cops that deals with drug dealers. This show is one that focuses both on the cops investigating the crimes and the criminals who are committing them for some it is simply for profit and power but for most of them it's about having enough power so that they can survivor the world that seem unable to escape. The show starts with there being shift in power in crime world when a young man Jung Shi-hyun who most know as Doctor's Son challenges the areas current leader in distribution for his position for reasons that are unclear for the first few episodes and this leads to a lot of in fighting and chaos between two groups of criminals.

This show is one that has quite a few twists in it which made it fun to watch but also makes it a bit hard to review without spoiling things so I will fairly vague about what the series is about. As a whole this series is one that did a really good job at making you feel for the characters that were living in the crime world whether they be criminals or undercover cops since the crime world is one that is full of shades of gray and things tend to quickly become out of control with the stakes being life or death for those involved. Those who live in crime world are often just doing what they have to survive and when they're not doing that there often doing whatever they can keep the people they care about safe in the dangerous complicated world they live in. With the crime world being one where personal loyalty comes before any mission and one that doesn't really play by any rules the scenes that involve the non-undercover cops are a lot less interesting to watch and overall I found myself liking and caring less for those characters than I did for our many group of criminals. 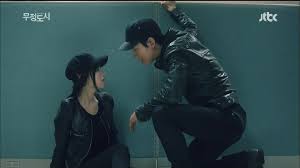 Overall I loved this series it was very well made the show has a really great dark but beautiful look to it that is also reflected in the soundtrack and the acting very good as well as is the story. There were so many great characters and relationships that I loved in this series. There were also a lot of great fight scenes that were shown throughout the show as well. This series is great and recommend it even if you don't watch Kdramas because it's just a really well made show even though it's dark and has a sad ending that fits the series. Please tell me your thoughts on this series.
Posted by lillylilac at 5:03 PM No comments:

Please tell me your thoughts on this episode.
Posted by lillylilac at 11:35 PM No comments:

Please tell me your thoughts on this episode.
Posted by lillylilac at 11:35 PM No comments: