Top 5 Thursday is a meme that I create to make lists of things involving TV and movies. I would love for anyone that sees this post to make list of their own whether it's in the comment section or on their own blog.
Since it's getting close to Halloween I thought that it was a good idea to make a list of my favorite vampires. 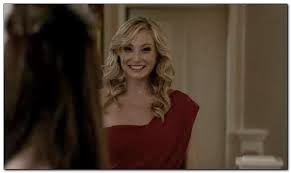 1. Caroline Forbes(Vampire Diaries): I really love Caroline because of her positive attitude that she is able to keep even though her life is pretty much a nightmare and I love that we got to see her transition into being a vampire and I loved that being a vampire didn't really change who she was but more gave her confidence in herself that she lacked as a human. 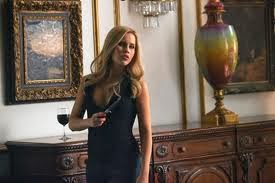 2. Rebekah Mikaelson(Vampire Diaries): One of the main reasons I love Rebekah is because even though she has been around a thousand years she hasn't really lived at all and all she really wants is to be able to have a normal human life which is why she so badly wants to go to high school or fall in love because those are part of the life she'll never be able to have but longs for so desperately. I also love that Rebekah is very into vengeance although Rebekah does get screwed over a lot she's always able to find  a way to get her revenge which is something I quite admire about her. 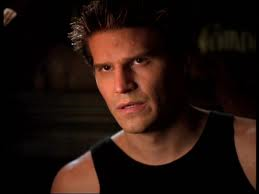 3. Angel/Angelus(Buffy the Vampire Slayer/Angel): I love Angel because there's a lot of duality with him and his Angelus persona, I like that Angel is the very heroic character who does all the good he can to make up for his past sins although that's not say he doesn't still have a dark side since he does, but I also really love the Angelus side of his personality that is pretty much pure evil and thinks murder as his art and I love how much he enjoys psychological torture as well. I also really loved seeing in the show Angel that Angel is actually a huge dork that is extremely socially awkward that wasn't something you'd expect out of him from only watching Buffy but it's something I love about him. 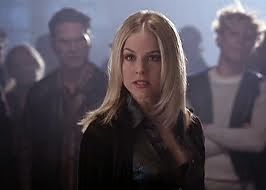 4. Darla(Buffy the Vampire Slayer/Angel): I love Darla because she so very evil but she also has a lot of depth to her with how we know so much about her past and I pretty much love her because she's kind of exactly what I think a female vampire should be like. 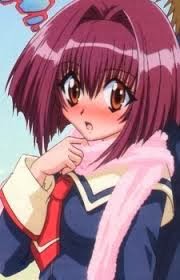 5. Karin Maaka(Chibi Vampire): I really love Karin because she's such an odd vampire in that she gives people blood rather than drinks and actually likes the sunlight and other things that goes against not only vampire lore in general but also the rules of the other vampires in the series. I also really love that she's such a teenage girl and has to deal with so many embarrassing situations.
Posted by lillylilac at 10:41 PM