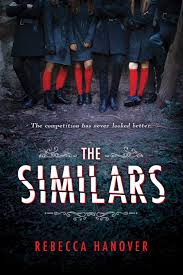 The Similars is about how Emmaline Chance who is returning for a new year at prestigious high school boarding school after her best friend Oliver committed suicide over the summer, there is a group of new students coming to the school who are clones that were created without the consent from the people whose DNA was used or the family of those people. The group of clones are referred to as the Similars and most of the the similars originals are also students at this school which makes the group somewhat of an unwelcome addition to the school. Emmaline at first is accepting of the similars since it's not their faults that they were created but then she meets Levi who is a clone of Oliver and it's just too much for her to handle having to deal with someone who looks just like her best friend but who acts entirely differently and shares none of the memories of the life she had with Oliver.

Emmaline wants nothing to do with Levi and after she gets mad at Levi for stealing Oliver's face, a matter he had no say in, he doesn't want anything to do with her either but circumstance forces the two of them together. After getting to know Levi more as his own person she starts to care for him in a way that is different from the way in which she cared for Oliver. Throughout this time Emmaline is also learning that the similars are different from ordinary clones and that the school seems to have a lot of secrets of their own that leaves Emmaline wary of who she can and can't trust.

Overall this was a good book that had an interesting premise, world and character conflict that were all set up well from the start. The book does a good job at making you care about the characters and at setting up mysteries in the world around the characters. Please tell me your thoughts about this book in the comment section down below.

Posted by lillylilac at 9:41 AM

Email ThisBlogThis!Share to TwitterShare to FacebookShare to Pinterest
Labels: Books, Review, The Similars